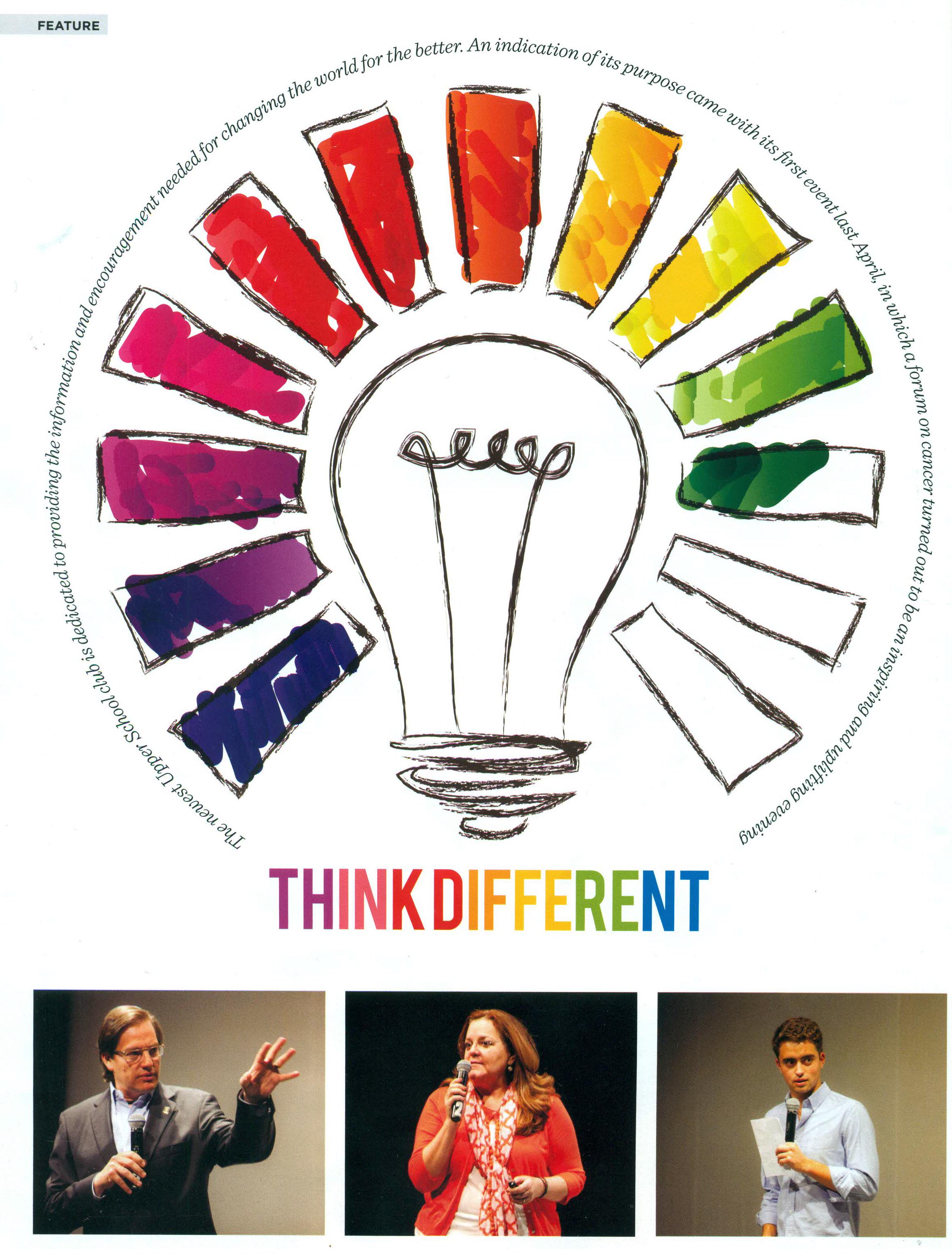 “Why are a bunch of high school kids giving a forum on cancer?” As rhetorical questions go, it’s an intriguing one. But what made it especially attention-getting last April 29 was that the asker was one of those “high school kids” who organized the forum.

Enrique Goudet had an answer to his own question. He had come back from vacation inspired by tales of doers and problem-solvers and was determined to become one of them. More important, he saw the need for a facilitator, a provider of both the inspiration and the means to effect change.

“It’s a question of understanding that we really can change the world for the better,” he said. “It depends on us realizing that, yes, we can.”

Enrique described his commitment to that ethic. “I was born into a family in which I never lacked anything,” he said “That’s why I feel morally responsible for those who don’t have the same luck as I do.” What sets Think Different apart from other community service-oriented ASF activities is its emphasis on changing thinking and creating awareness. You might even say it is involved in indirect action rather than direct action. What it aims to do is increase awareness – not just about the problems that humanity faces but about the potential we have to solve those problems. And that, dear Focus reader, is why a bunch of high school kids were giving a forum on cancer.

It was an inspired choice, because cancer is one of those challenges that is easy to be fatalistic about, to feel that there’s little we can do. The three featured speakers at the first Think Different forum made it clear that that’s not the case. One of them was a former national health secretary, Salomón Chertorivski Woldenberg, who (though barely 40 when he spoke to the students, staff, parents and other community members at the Fine Arts Center) has had a full career as a public health and social development official at the federal, state and local levels.

Chertorivski’s rundown of the strides that have been made in cancer detection and treatment made it clear that there is plenty that can be and has been done. His message hit home as he listed the five areas of focus in dealing with the disease. The first was risk reduction – that is, the lifestyle changes such as quitting smoking and eating healthy that any individual can make to lessen the likelihood of cancer knocking on the door. Early detection greatly increases the chances of curing the disease in its beginning stages. Finding a cure is the work of science, both public and private. Many kinds of cancer are much more treatable today than in other eras. 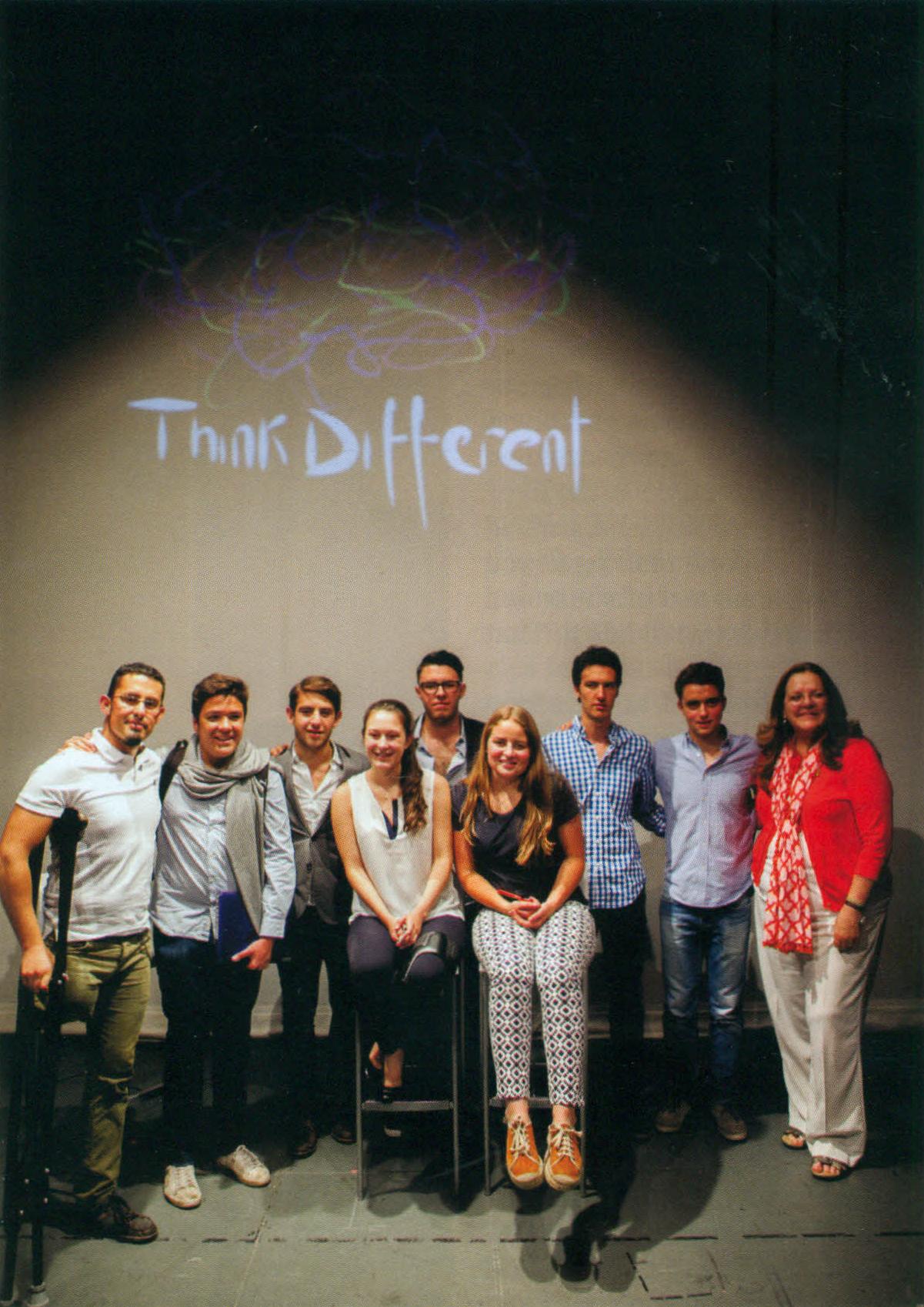 Fourth comes survival, a quest in itself after a cancer diagnosis. The fifth is palliative care, something that has been getting much more attention in this century than the last. It aims to improve the final days or years of life for those with terminal cancer.

The second speaker, Laura Vidales, was a typical mother in every way until her boy Andrés was diagnosed with cancer. After the shock, she dedicated herself to making her son’s life as full and joyous as possible. Then, after his death, she focused on another cause, creating a foundation called Aquí Nadie Se Rinde (Here No One Gives Up) to help care for children with cancer.

“In every one of their smiles, I see Andrés,” she told the forum audience.

The third speaker was a survivor, Germán de la Rosa, who lost a leg to cancer. Still relatively young, he spoke about meeting the new challenge in his life, which he casually described as, “In life, we all experience unexpected moments.”

Like many others, Germán was determined to continue his participation in athletics. And he did. But what made his story especially inspiring was the extent to which he participated. Running races and competing in triathlons were just the beginning. His achievements included extreme sports that would be beyond the ability of most people in the world, with any number of legs.

At the heart of the forum was the special knowledge that it was conceived and carried out by young people. That fact alone was a cause for optimism and a reason to believe that, yes, we can change the world for the better.