IRVINE, CA – May 21, 2015 – U.S. Secretary of Commerce Penny Pritzker presented Edwards Global Services, Inc. (EGS) with the President’s “E” Star Award for Export Service at a ceremony in Washington, DC earlier this week. The President’s “E” Award is the highest recognition any U.S. entity can receive for making a significant contribution to the expansion of U.S. exports. 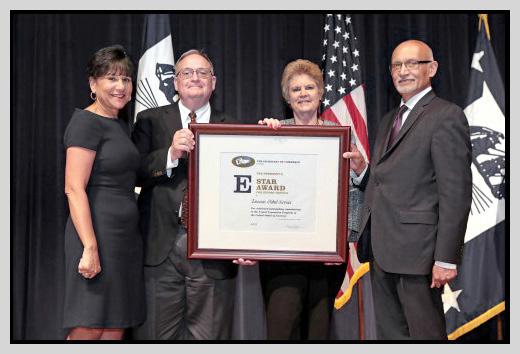 “The President’s ‘E’ Award winners are outstanding American businesses and organizations that have played a crucial role in strengthening and growing our economy throughincreased U.S. exports,” saidSecretary Pritzker. “By selling Made-in-America goods and services internationally, winners are creating jobs in California and their local communities. Exports are critical to our nation’s competitiveness in the global marketplace and solidify our country’s economic leadership across the globe.”

“In 2011, EGS was given the President’s ‘E’ Award For Export Services and now, four years later, we are honored to receive the highest President’s export award as a result of continued, documented success for the US-based franchises our company represents,” said William Edwards, Founder and CEO of EGS.

In 1961, President Kennedy signed an executive order reviving the World War II “E” symbol of excellence to honor and provide recognition to America’s exporters. This year, Secretary Pritzker honored 45 U.S. companies with the President’s “E” Award for their outstanding work to reduce barriers to foreign markets and to open the door to more trade around the world.

American companies are nominated for “E” Awards through the U.S. and Foreign Commercial Service office network, located within the Department of Commerce’s International Trade Administration. Record years of successive export growth and an applicant’s demonstration of an innovative international marketing plan that led to the increase in exports is a significant factor
in selecting the overall winners.

For more information about the “E” Awards and the benefits of exporting, visit www.export.gov.